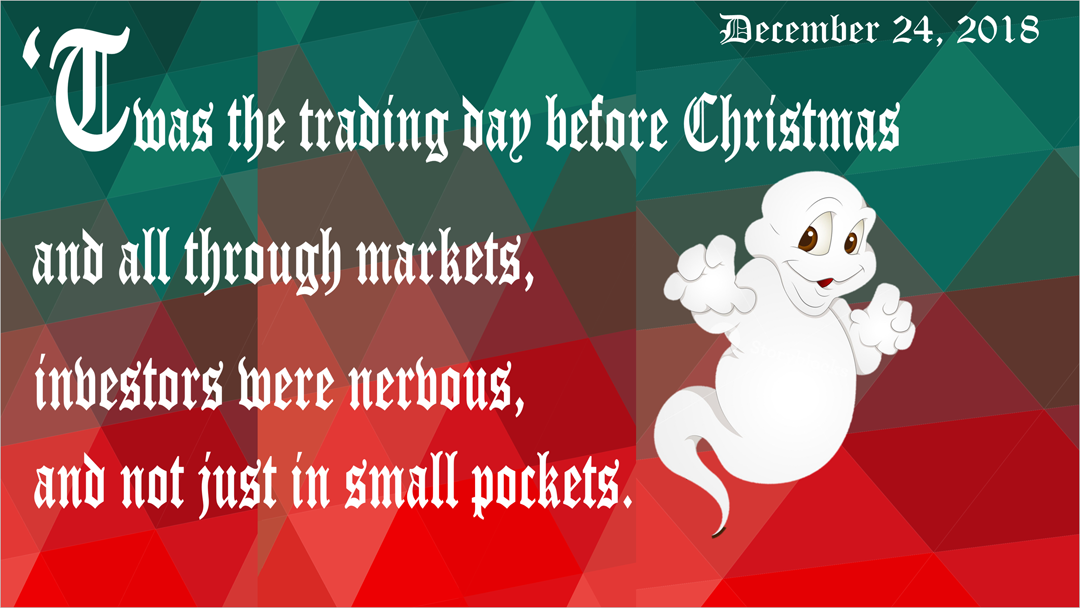 'Twas the trading day before Christmas and all through markets, investors were nervous, and not just in small pockets. 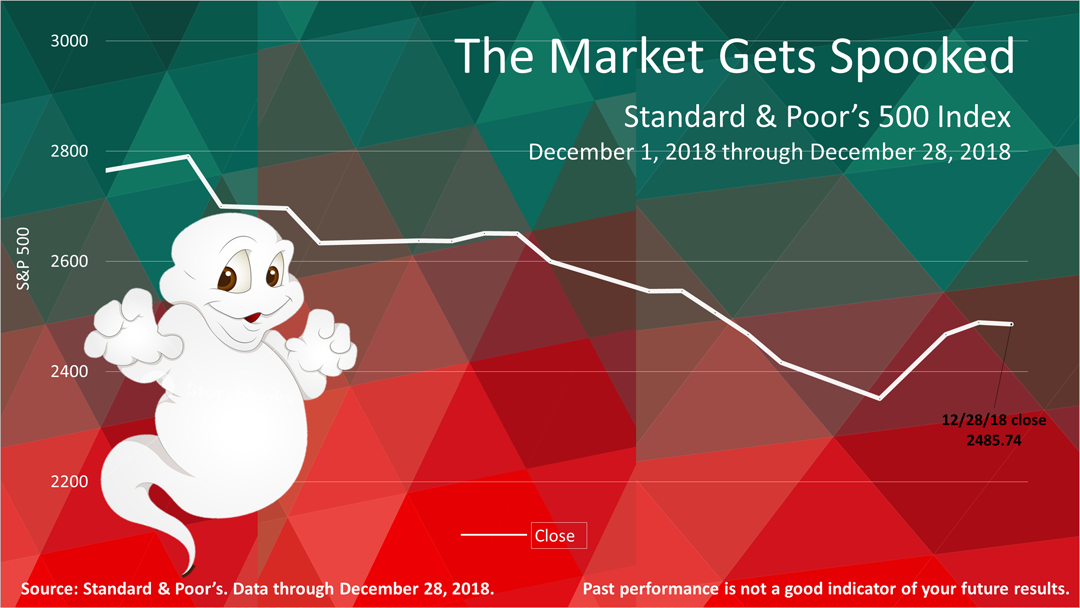 December 2018 was a month most stock investors really just want to forget, but we must remind one and all that, you get what you get, and we sincerely hope you're not too upset. 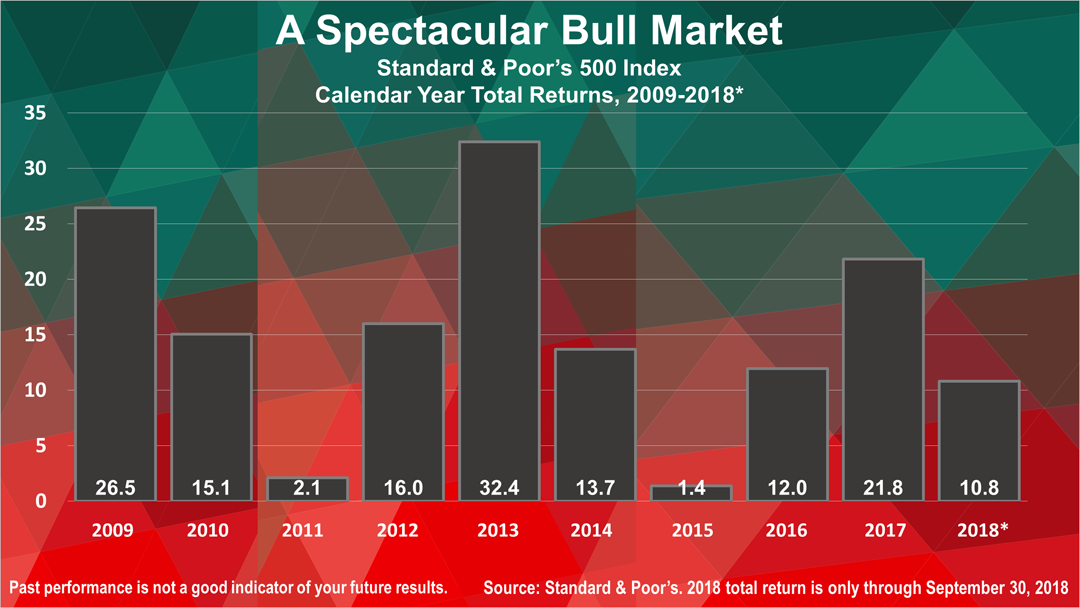 The stock market had risen for nearly 10 straight years, and a bear market now and then just happens, due purely to emotional fears.

While no one can predict the next S&P 500 index low or high, the latest figures make the economic forecast extremely bright.

Sparing you further rhyme, here's an analysis of the facts and it won't take much time. 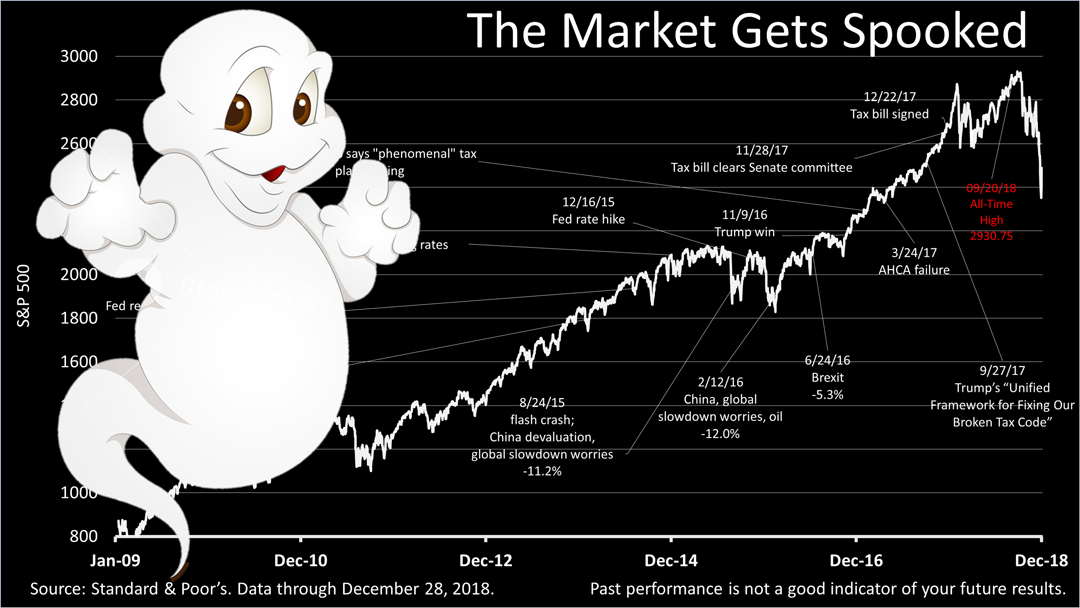 The market was spooked by the Fed's decision to hike interest rates on December 19th. 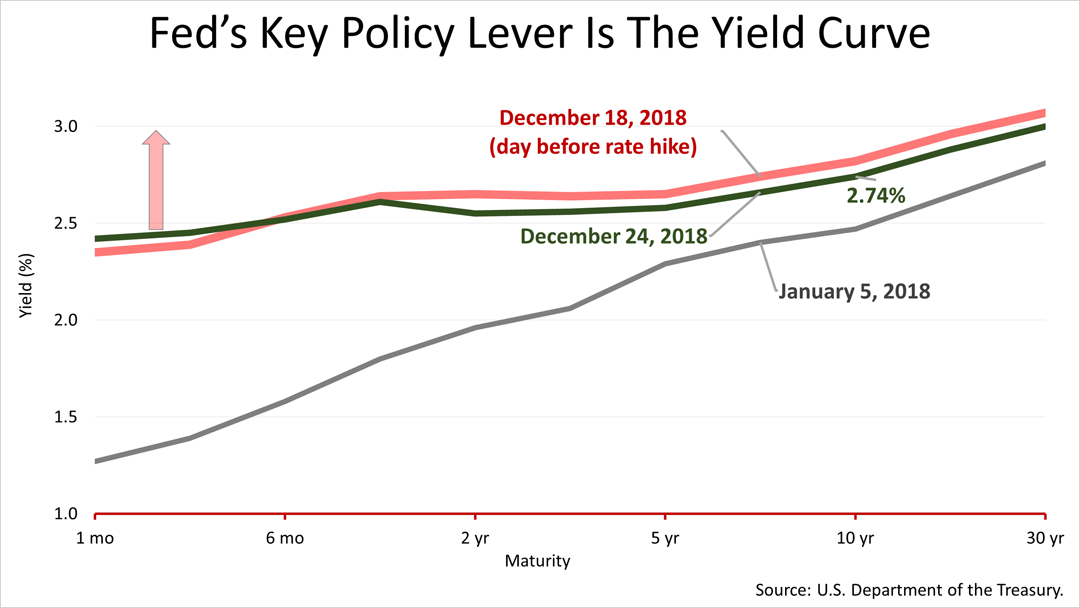 Hiking interest rates flattened the yield curve, and that's the key lever of the U.S. economy. Regulated by the Federal Reserve Board of Governors, an independent body, the yield curve is the difference in yield between a 10-Year U.S. Treasury bond and the Federal Funds Rate. The Fed funds rate is the interest rate charged by the Fed, the central bank of the U.S., and tracks closely with the movement of the highly-liquid 30-day Treasury-Bill. The yield curve on December 24th, shown in green, is flatter than it was just a week earlier. The difference between the one-month T-Bill and the 10-year Treasury Bond declined. At the start of 2018, the gray line shows that the slope of the yield curve was much steeper. 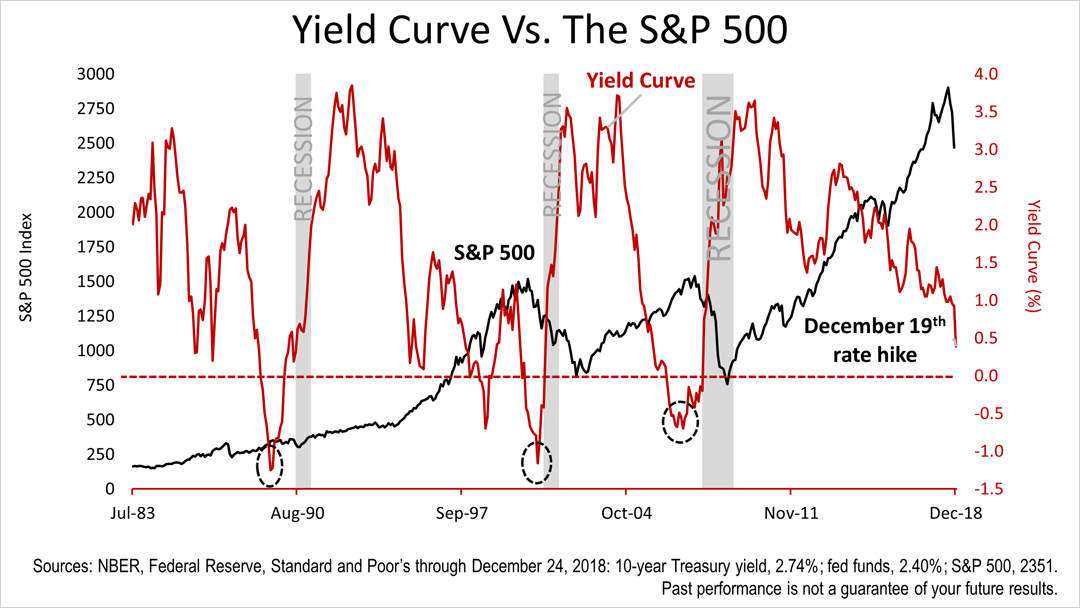 Charting the S&P 500 stock index total return against the yield curve since 1983, the Fed's rate hike and the stock market plunge.

That's what made stock prices drop sharply, fear that the Fed was about to cause a recession. 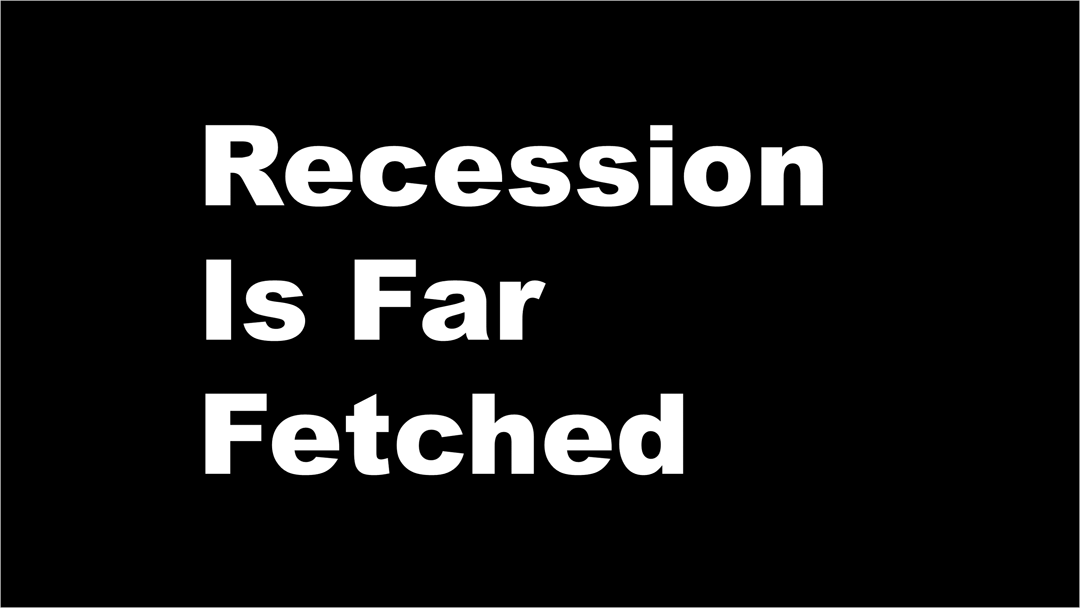 But the real economy shows no sign of a recession. The economic indicators show the economy is doing just fine. 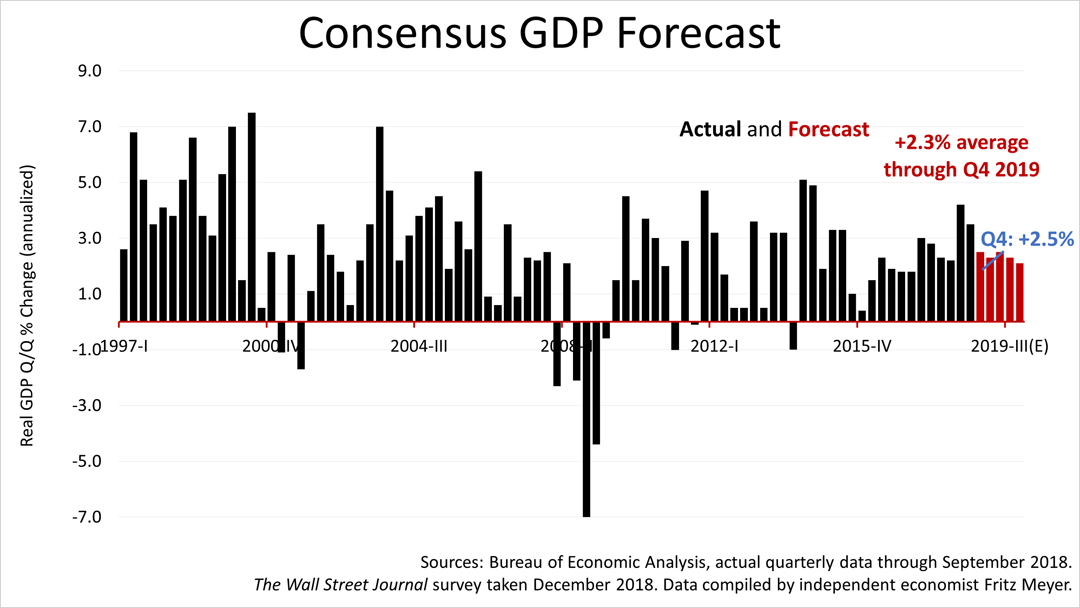 The monthly survey of about 60 economists by The Wall Street Journal, conducted in early December, before the Fed rate hike, resulted in a consensus forecast for a 2.3% growth rate for 2019. That's robust. It's down from 2.5% last month but certainly nothing like a recession in which the economy shrinks. 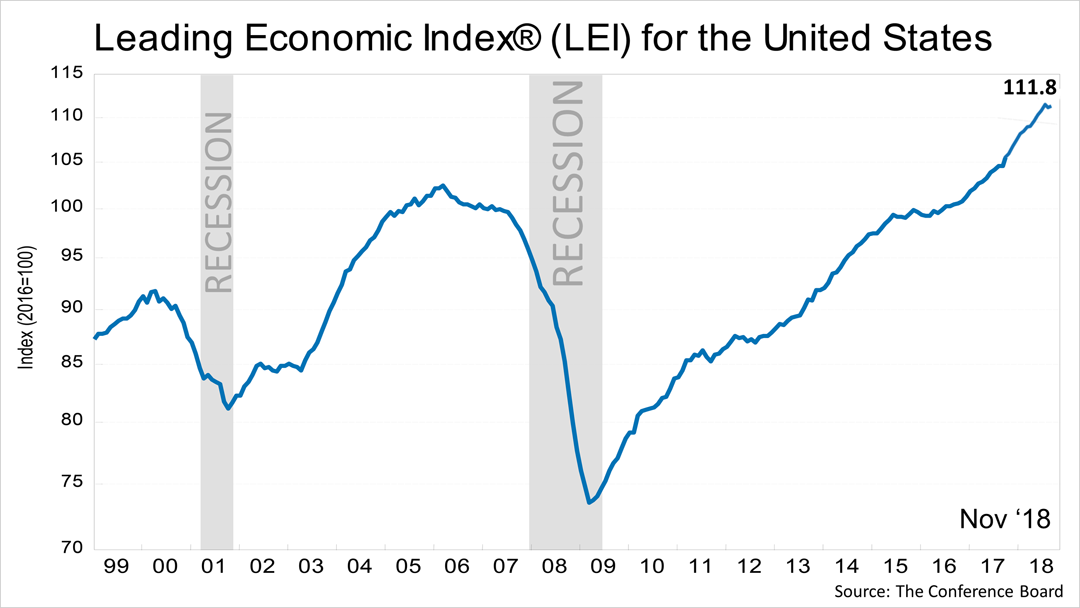 The forward-looking U.S. Leading Economic Index — a composite of 10 components of economic growth — rose in November by two-tenths of 1%. It had ticked down by three-tenths of 1% in September before resuming its long ascent in record territory dating back over two decades.

The Conference Board economics research department, which analyzes this data, said, "Solid GDP growth at about 2.8 percent should continue in early 2019, but the LEI suggests the economy is likely to moderate further in the second half of 2019."

The 2.8% growth expected by the Conference Board is much higher than the 2.3% consensus forecast of economists surveyed in The Wall Street Journal.

The LEI has definitively collapsed many months in advance of the last two recessions. Nothing like that is happening now. 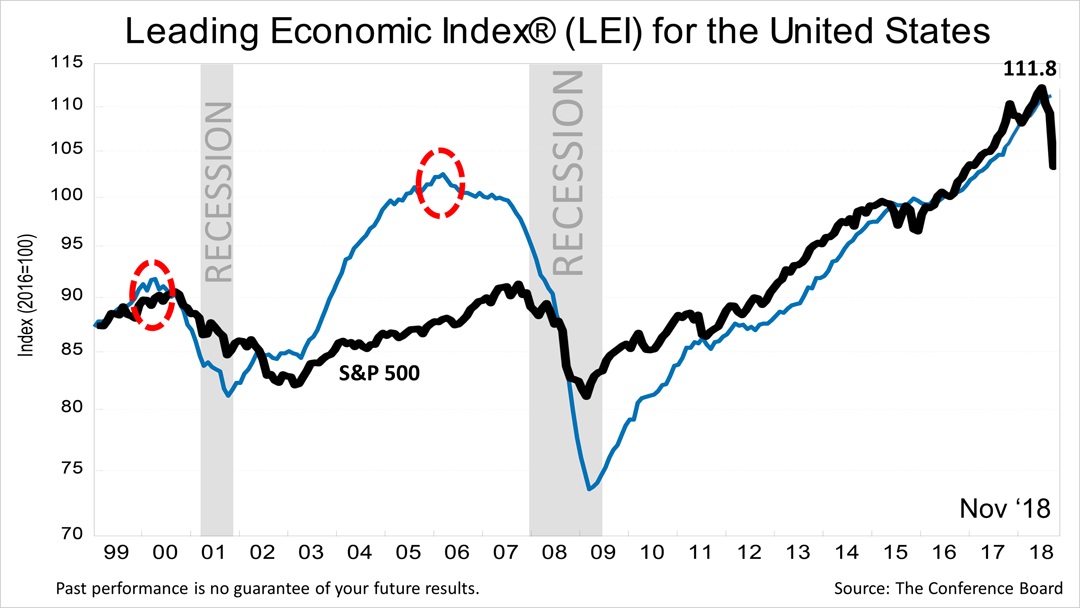 
The December stock market plunge was not preceded by a collapse of the LEI.


It's dissonant from the fundamental economic data. 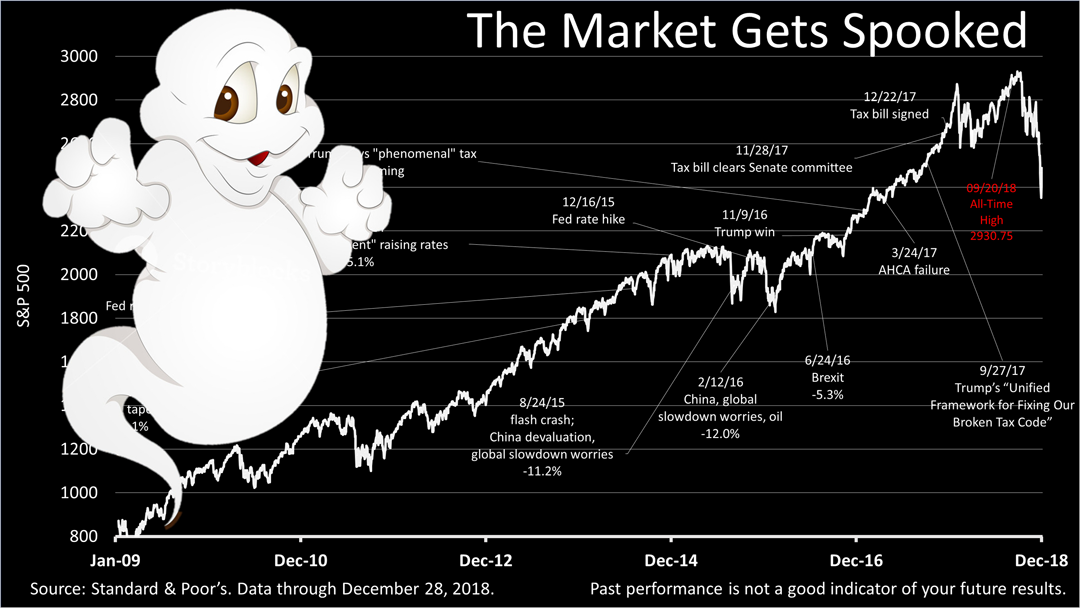 The stock market has been spooked by the Fed's rate policy, but fundamentals show no sign of a traditional bear market recession.

While the S&P 500 fell by 19.8% from its September 20th high and, thus, this plunge makes it into the record books as an official 20% bear market after rounding, the real economy remains strong.

This article was written by a veteran financial journalist based on data compiled and analyzed by independent economist, Fritz Meyer. While these are sources we believe to be reliable, the information is not intended to be used as financial or tax advice without consulting a professional about your personal situation. Tax laws are subject to change. Indices are unmanaged and not available for direct investment. Investments with higher return potential carry greater risk for loss. Past performance is not an indicator of your future results.